“The Novels of Bak Jiweon Translation of Overlooked Worlds”

Leave a comment Posted by Emanuel Pastreich on May 17, 2011 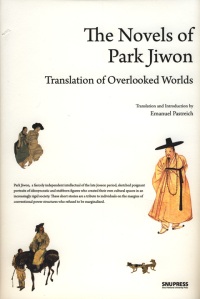 The Novels of Bak Jiweon

Bak Jiweon’s novels are populated with the full range of individuals who had been entirely excluded from the literary lens of Joseon (1392-1910) Bak’s writings are an exploration of the full range of human experience in society. But rather than attribute insights on moral issues to Confucian sages—as did his peers, Bak places his words in the mouths of beggars, con men, day laborers and widows. Those who had no voice in Joseon society are given a chance to articulate their perspectives in the language of the scholar: literary Chinese. But these novels are not simplistic tales of empowerment either. They are permeated by irony and ambiguity. The low-mimetic protagonists make Korean high society appear ridiculous, but they themselves do not escape ironic treatment. The importance of moral action may be the explicit message of many of the novels, but the tales are rife with anecdotes of uncertainty and even futility.

Bak was swimming against the tide in a profoundly conservative and increasingly inflexible social establishment when he wrote these novels in the late eighteenth century. The Confucian gentry had lost sight of larger social responsibility, being more interested in petty disputes over land and status. Bak demands an erudite and patient reader. Tales that appear to be simple parables reveal on a second or third reading meticulous attention to structure and carefully selected archaic expressions. Bak employs Chinese characters in rare senses throughout the book. His crabbed, dense writing has much in common with the literary archaism that swept China during the Qianlong period in China.

Bak lived a life of intense, but often solitary, intellectual engagement. He was known best as a fiercely independent autodidact who read widely in philosophy, history, astronomy, geography, military affairs, agriculture and economics, but kept a distance from established institutions. Bak became a heroic figure for later scholars because he so vividly limned the inadequacies of Korean society, without blinking.