Leave a comment Posted by Emanuel Pastreich on May 28, 2011

It may seem odd to suggest that Italy be the model for Korea in its future development in technology.

Although Italy does not hold the dominant position in high volume manufacturing that Korea possesses, Italy offers exactly what Korea needs to jump into the next stage of economic development: an emphasis on fashion and ergonomics.

Italy has established itself as the undisputed leader in design, with such names as Gucci, Prada and Ferragamo in fashion and in the automotive sector with leaders such as Ferrari, Maserati and Lamborghini. The aesthetic sensibility and artistic quality found in Italian products are what Korean products lack.

Let us start with the basic facts

Korea does not need more technology at this point and it does not need more manufacturing capacity. It needs to build cutting-edge devices that will capture the imagination of users and define new fields, along the lines of the iPhone.

Let us imagine that Korea builds a “Ferrari of Hand-held devices,” a top of the line device that is so innovative and so luxurious that it leaves behind all competitors. That specific product will affect how all Korean products are perceived globally, placing Korea in an unprecedented dominant position.

At present, there are top of the line handheld devices available, but the market for a truly exclusive range of handhelds (10 million won to 60 million won range) has yet to be explored seriously. The opportunity for Korea is tremendous in this blue ocean.

Part of the problem is the “imagination gap” that so troubles Korea. We find that the design used in Korean devices is often unimaginative and even trite: an attempt to catch up with an imagined modern world in the United States rather than a daring leap forward into uncharted territory. The images used for the icons in Korean handhelds are bland stock photos. The structure of menus lacks innovation. The technology is a breakthrough but the design is not.

But the point is not that Korea should team up with Gucci. Rather Korea should learn from Italy how to combine its own cultural and manufacturing sectors effectively. All you have to do is open up a recent issue of Art in America magazine to see that Korea has the most creative and adventurous visual artists in the world. Those Korean mavericks of painting and sculpture (music and drama) are second to none. But they are not being consulted at Samsung about the layout of the Galaxy. Korea has both the artistic creativity and the engineering know-how.

All we need is to bring them together

Let us take a moment to imagine what the Ferrari of handheld devices might look like. The exterior will be handcrafted of wood, stone and silver with the loving care you might put into a diamond necklace. Although the software within the device will be changed constantly, the perfectly crafted exterior will last for a lifetime.

The visual representation of information will be deceivingly easy to use, so well thought out that it is additive, no matter what the price. CEO s will gladly pay 50 million won, or more, for one of these devices.

The images used within the device will be stunning. They will be remarkable illustrations in a perfectly designed “interior architecture” for the representation of information.

The layout within the programs will be original and highly functional. The handheld features an inner landscape so perfectly structured as to create a “memory palace” for the user that he can constantly customize to his needs. The user can walk through a 3D “house” within the device that organizes all information on shelves and drawers, or boxes, or whatever form is most appealing to the individual. Just clip on a pair of electronic “eyeglasses” and the user can wander through the device like her apartment to find and organize information in the most convenient manner.

As the user builds the “interior” of his handheld’s virtual reality, this activity of personalizing the representation of information becomes a personal, even creative, activity for the user. He will never want to give up the device he has invested so much time in creating an internal world in.

The major problem of our day is that handhelds, rather than helping the CEO , have made him into a secretary. He must schedule everything by himself and call, message or e-mail all day long. The amount of time consumed is enormous. The solution is to put the secretary in the device. A live secretary (or team) works remotely with the handheld device to arrange all information in an optimal manner 24 hours a day, and conduct research. A supercomputer link helps with more complex tasks. The potential of this market for high-end handhelds has not even begun to be explored.

If the user has a pile of business cards after a party, he can just take a picture of them with the device and press send. The information will be input in the optimal manner by the device support team. And after research, has been done by the team on the business cards, recommendations are made as to how those individuals could be useful for specific ongoing projects.

If the CEO needs to talk with an expert on nuclear power, or on biotechnology, or a real estate agent in Argentina, the support team will use a paid group of consultants to set up the telephone call immediately. Simultaneous translation will be offered as well if necessary. For a bit higher cost, the CEO can be put in touch at the press of a button with Nobel Prize winners or important figures in the arts and media. This built in consulting service will make all the difference to the CEO in his business activities. Price will be a secondary concern.

Korea can learn something valuable from the Italian tradition of high-end craftsmanship. Korea has some of the most creative artistic minds in the world. Bring those artists into the workshop at Samsung and SK and there will be no limit to how far Korea can go.

“An Eco Currency” (in Chinese)

Leave a comment Posted by Emanuel Pastreich on May 26, 2011

“Korea Should Make the Ferrari of Smart Phones” (in Korean)

“Korea Should Make the Ferrari of Smart Phones” (in Korean)

“City of Seoul will help you become an entrepreneur” 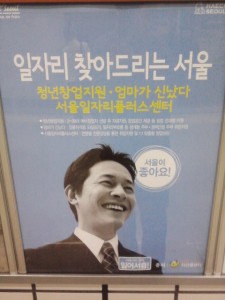 The City of Seoul has launched several major initiatives to encourage citizens to become The City of Seoul has launched several impressive programs to make its citizens entrepreneurs. The hope is that with a bit of direction from the city, youth can rise to the occasion and become truly creative. As an American, I tend to be skeptical of such efforts, but Korea has a certain knack for surprising me.

Korea’s vision of a multicultural World 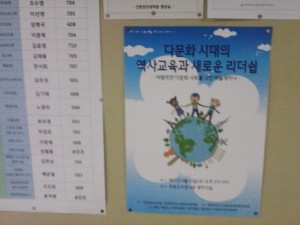 Although there remains a strong sense of ethnic pride in Korea, you need only look at TV today to see an organized effort to introduce people from around the world in the most friendly and non-confrontational manner. It is clear that there is an imperative now to ride the wave of multiculturalism, creating a new Korea and avoiding the terrible fate of a super-annuated society. 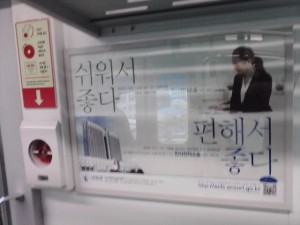 You have to hand it to Koreans for their efforts at innovation. this advertisement states” So easy, it’s great! So convenient, it’s great!” The advertisement is for a new online system for filing law suits. What a concept: cyber litigation. I have not had a chance to look into the details about this Korean e-government innovation, but I must confess I am intrigued.

Seoul is has not been known for its creative architecture. In terms of innovative design in architecture, Shanghai and Beijing have been ahead of Seoul in many respects. But we can see creeping up everywhere signs of a more innovative approach to architecture. In this case, we see a rather nondescript office building with the silhouettes of heads as a pattern on the first floor. 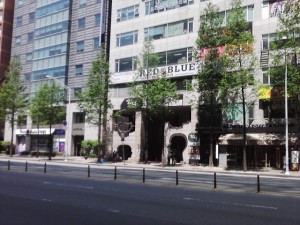 Today, May 21, 2011, Seoul had an enormous party to launch the floating islands in the Han River, a massive project to create a truly innovative space.  The islands were officially opened last year. 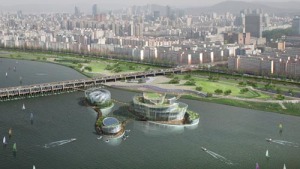 Opening soon is the Dongdaemun Design Park which will certainly be unlike anything seen in Korea before. We see everywhere signs that Seoul is making a serious bid to be a competitor with Singapore for the value-added culture and education center of Asia. Although English language is a challenge, we are guessing that people will start taking Seoul quite seriously in the near future. 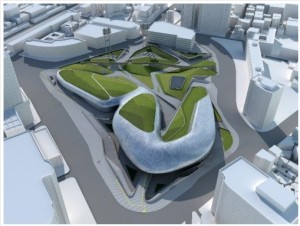 Convergence is not just about technology. It is an overarching term that increasingly concerns artistic expression. We see an increasing number of artists, museums and other institutions advocating a coming together of disciplines. Here a page of note from an art magazine. 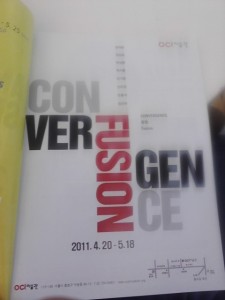 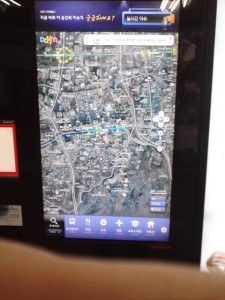 Daum, the online search engine that once was the dominant force fell behind Naver in recent years. But its new Daum Map offers quite detailed walk-through tours of much of Korea that are quite impressive. Now in subway stations we find these large interactive maps that allow passengers to scan the neighborhood around the station and pinpoint restaurants, hotels and other important facilities.

The hills above Itaewon are speckled with handsome homes—many of which are surrounded by high walls hiding elegant gardens. There is one home, however, that is always open to visitors, serving as an artistic commune, where the owner can be found sitting at the table in front discussing art, society and culture with whomever joins her. Her name is Paik Hae Young and her eponymous Paik Young Gallery is a unique experience, a breath of fresh air in an age of commercialism and consumption. Her house is a communal space for artists, those interested in art, children and a variety of like-minded souls.

The Paik Hae Young Gallery is dedicated to promoting Korean artists abroad and introducing international artists to Korea. The emerging artists and established artists who visit here bring with them a tremendous variety of skills. The gallery displays works of art, but also invites  artists to stay in the delightfully airy guest rooms upstairs, creating art, talking about their art and interacting with artists and lovers of arts from all walks of like. We find critics, artists, journalist and professors drawn to this oasis in Seoul.

Opening in 1977, the Paik Hae Young Gallery is a major dealer that introduced important Korean artists to the world. It has since broadened its role from the dealership to agency for cultural affairs including art consulting for corporations, academy program for collectors and architectural consulting.

Remarks Director Paik, “I started as a pianist and was led to start collecting art when I was living in New York in the 1980s. I collected primarily American art and had close relations with, and collected the work of, Korean artists active in New York City.  When I returned to Korea in 1988, I started the