Creating a New Image for Daejeon

Leave a comment Posted by Emanuel Pastreich on June 28, 2011

The four years that I spent in Daejeon were a remarkable experience. Among the various projects, I derived immeasurable pleasure from various projects aimed at raising Daejeon’s cultural profile. Some of that effort was related to work with the Daejeon Metropolitan City government, but much was spontaneous, growing from  my friendship with the artist Yoo Dongjo or my talks with my students. Friends from  Daeheung Dong district of Daejeon–where the artists gather–gave many ideas.

Daejeon means literally a “large field” and refers to to the fertile basin surrounded by mountains that makes up the city. Originally, the cultural centers of the area were around the two Confucian scholarly communities, one in the north in Hoedeok and one to the south in Jinjam. The building of the railroad station in the center and the creation of an artificial new town in the 1920s called Daejeon obscured much of those origins.

As I thought about the matter, especially working together with the Daejeon Green Growth Forum, it seemed increasingly critical to draw attention to the environment as part of the reformulating Daejeon’s identity. In particular, I wanted to highlight the three rivers that meet at Daejeon and define the city: the Gapcheon River, the Daejeon Cheon River and the Yudeung cheon River. In fact, one region of Daejeon was originally called Samcheon (three rivers) District (삼첨 三川). But the name was changed about 15 years ago because residents thought the land values would be greater if the area was considered part of the Dunsan District.

The first illustration is a work of calligraphy by a good friend that says, beautifully, “Daejeon: Three Rivers” or simply “Big Field: Three Rivers.”  Such a simple bit of calligraphy forces the viewer to reconsider what exactly is meant by Daejeon, and draws him or her back to the environment itself.

The second drawing is  by me: a possible flag for Daejeon featuring the three rivers with “Daejeon” at the top and “Three Rivers” at the bottom. Although the overall design is pleasing, but the rivers are simply too static.

At the bottom is a more stylized version by my friend Yoo Dojo.

Finally, we have young people wearing my design for a Daejeon T shirt. This T shirt was not immensely successful, perhaps because it was designed by a 46 year-old with little sense for the likes of young people.

The whole project was great fun. It was linked to a project with my students for a Daejeon website, “Daejeon Compass,” into which we put great effort. 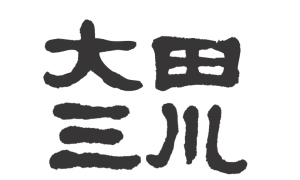 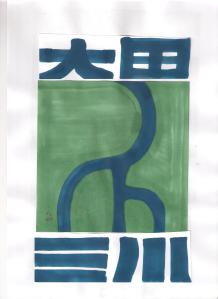