Time: The 4th Dimension in the Daum Map

Leave a comment Posted by Emanuel Pastreich on July 10, 2011

Time: The 4th Dimension in the Daum Map

Daum was a bit of a sleeper in terms of innovation, but it has come roaring back in the last year with the introduction of Daum Map http://local.daum.net/map . This map allows you to zoom in on most streets and get a 360 degree view as if you were right there on the ground. Of course Google Maps, and others, offer that service, but Daum has taken a few very innovative steps. First, there is a menu up towards the left hand side of the top that offers four options for days, months and years. That means that the viewer has the option of observing the scene presented for either April, 2011, October, 2010, March 2009 or July 2007. A temporal element is introduced into the information presented that is quite novel. One might wonder whether a bit of animation would allow us to take the scenes back a hundred, or a thousand years ago in the future.

In addition, Daum Map now features an approximation of distance for objects and sites in view. Just click on them with the cursor and the distance in meters is indicated.

Such on-location maps are in the stone age. When they are later supplemented with animation features, they will become indepensable. the risk is that we will become so dependent on them that we can no longer function without them.

Daum Map now offers choices of times for the images it shows for location. The 4th Dimension 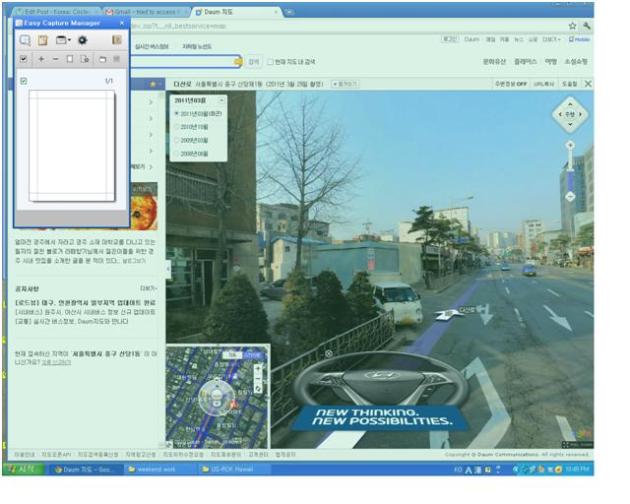 Today in Korea
← “Social Impacts of the Taean Oil Spill: An International Perspective” (guest report) “Impending Changes on the Korean Peninsula and the Future of U.S.-Korean Relations” (Talk) →