Leave a comment Posted by Emanuel Pastreich on July 15, 2011

My close friend Gosan, with whom I have been working with on an alternative education project for the last six months, invited me to participate in one of his classes at Daeseong Middle School in Gochang, Korea. I travelled down yesterday and attended Gosan’s alternative class last night. There were about 25 students who had decided to use the time that they would normally devote to homework to attend this one hour class at six PM. First, The enthusiasm was palpable.

Gosan talked about the manner in which we assess problems and how we can make use of the knowledge we have to solve problems with which we are confronted. He broke the students into small groups of five or six (I was seated with one group) to discuss the topic.

Gosan explained at length the principles of physics that the student had covered in their class. He then posed a rather unexpected challenge:

“A large mass is hurtling towards the earth and if it crashes into the earth, it will destroy all life. If you hit it with multiple nuclear weapons, you will just blow it apart temporarily and it will congeal again within a very short time. What might be a way to save the earth?”

The students were given about ten minutes to actively debate between each other possible solutions to the challenge. They of course debated the power of gravity and a variety of other tricks that might save the earth. After ten minutes, Gosan asked each table to give their response and responded thoughtfully to the variety of responses. 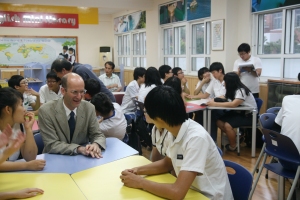 The students were quite caught up in the lesson and seemed to greatly enjoy it. The debates were lively. The students tried to apply what they had learned in class directly to an unanticipated question. It made them think seriously about the nature of gravity and the position of various objects in space.

What is so promising about Gosan’s experiments is that they offer the potential to make all that is good about Korean education part of a larger move towards a more engaging paradigm. He is not denying the importance of what the students learn, just providing a compelling means of reifying it. He offers an opportunity for students to work together, rather than competing and also for them to think creatively about the information they have absorbed.

I was quite impressed by the principle, Mr. Kang Heon-Hee, who showed remarkable vision and is a strong support of Gosan’s work. The halls of the school are lined with famous works of arts, each with carefully crafted explanations. He has a clear vision of a total cultural experience for students. The faculty and students are engaged in innovative projects that are only limited by the national examination system that requires them to study constantly.

Mr. Kang also is involved in various cultural activities in the Gochang region and writes extensively about his ideas about education and culture. He gave me a copy of an essay he wrote entitled “I would rather live as a leaf than as a flower” (꽃보다는 앞처럼 살고 싶다). He argues that there are very substantial aspects of learning “the leaves” that are often overlooked in our search for verifiable results like tests “the flowers.” Mr. Kang has demonstrated remarkable openness to our proposals for a new educational approach that would make the student the center for education.

Education, Today in Korea
← “The Korean Peninsula and the Struggle between World Powers” (talk) Anti Nuclear Graffiti in Seoul →