Leave a comment Posted by Emanuel Pastreich on January 18, 2012

The remarkable emergence of women as the critical political force in Korea is best embodied by the meeting on January 17th, 2012, between Representative Park Geun-hye, chairwoman of the Grand National Party’s emergency committee, and Han Myeong-sook, chairwomen of the  Democratic United Party. Needless to say, it is the first time that the leaders of two major Korean parties are both women. 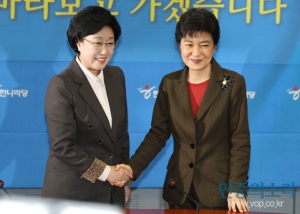 The meeting was filled with no small degree of irony. Park is the treasured daughter of the late President Park Chung-hee, well known for his efforts to suppress by any means his opponents. Han was one of the victims, spending two years in jail in 1979 for political reasons. Her husband spent 13 years in prison.

There is something quite touching about seeing the two of them together, and there was a certain respectfulness in the manner in which they addressed each other that suggested something of a new direction for Korea that goes beyond the macho, soju drinking, room salon visiting, bottom-line driven culture that has so negatively impacted many of Korea’s best and brightest.

At the same time, the resolution of this ancient battle for the soul of Korea between progressive and conservative forces embodied in this meeting also threatens to end the tension and critical inquiry that has made Korea so democratic in the first place.

Essays, Today in Korea
← Emanuel to deliver talk entitled “The Future of the Research Institute” The importance of the humanities →