Talk on how Korea can learn from the past in implementing a program to work together with China to combat the spread of deserts (Saturday, May 26, 2012)

Leave a comment Posted by Emanuel Pastreich on May 30, 2012

I gave a talk for a group of Korean college students preparing to travel to China where they will work together with Chinese students on anti-desertification projects in July. The students are from universities across Korea and the event was sponsored by the Korea Foundation and Future Forest, the NGO dedicated to Korea-China cooperation on environmental issues of which I am a member. This new effort to bring together young people from Korea and China represents the initiative of the Asia Institute to build close networks between people of different nations that parallel technological and logistical integration.

The talk stressed the legacy of Park Jiwon, the 18th century Korean thinker who made such an effort to understand China accurately and engage in a deep dialog with ordinary Chinese about contemporary issues. I suggested that Park Jiwon could be a model for us today. Moreover, I stressed that Koreans have a tremendous responsiblity to set a model for the world since so many countries, so many people, are benchmarking Korea. If Koreans care about the environment, others will follow Korea. If Korea promotes a culture of consumption, many countries will follow.

The talk was most important because of the questions and discussion with the students. 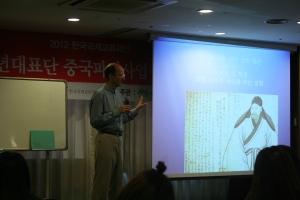 Discussion of the thought of Park Ji-won, 18th century Korean intellectual deeply involved in the Bukhak (Northern Studies) movement to reassess Korea’s relationship with China. Emanuel argued that we can learn much from that age about how to effectively interact with China.

Question from a student