Peace on the Peninsula through Art: Park Sidong’s Seokjangni Art Museum on the DMZ

Leave a comment Posted by Emanuel Pastreich on August 4, 2012

Peace on the Peninsula through Art

I first visited Park Sidong’s remarkable   Seokjangni Art Museum on the DMZ in March, 2012 after attending a seminar held at a military outpost overlooking North Korea. I was on a panel with artists and scholars discussing how an innovative residency for artists held right on the DMZ could serve as the first step towards bringing peace to the peninsula. The idea struck a chord with me. Could it be that rather than holding yet another seminar or writing yet another op-ed, just having artists practicing art could help facilitate the cultural and ideological shifts required to move beyond the current stalemate? I think there is that  chance. 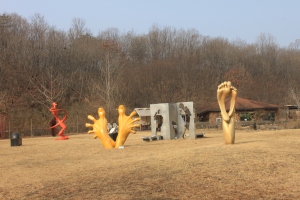 The sculpture greeting the visitor 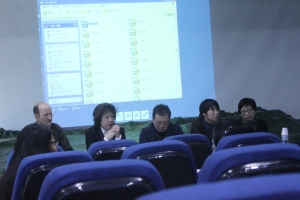 Emanuel sits on a panel of artists and academics discussing how the DMZ residency program for artists can start the slow process of peace on the Korean Peninsula.

It was only later that I learned just how important a role the sculptor and visionary Park Sidong played in making this residency successful and his deep commitment to employing art along the DMZ. I spent the night at his sculpture park with my family after the seminar, and I did so again with my father as well last week when he visited Korea.

Mr. Park is a remarkable man, with the kindest face, the ultimate patience with children and foreigners, but also the deepest passion for his goal. He has populated his Seokjangni Art Museum with extremely thoughtful and provoking art and he has embraced the problem of peace at all levels, aesthetic, ideological, political and cultural, without breaking off dialog with anyone.

Around his tea house, and the bungalow houses that guests stay in, stretch any number of sculptures. A pond full of army boots, surrounded by barbed wire, where frogs sing in the evening. Taught stretched feet that emerge from the ground, long noses that droop down from toilet seats and opaque symbols of sexuality, culture, technology and war. 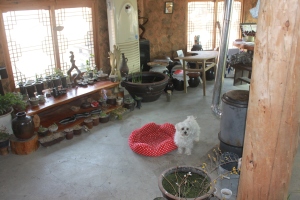 Inside the tea house at the art museum. 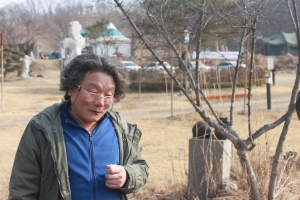 Park Sidong in his sculpture park 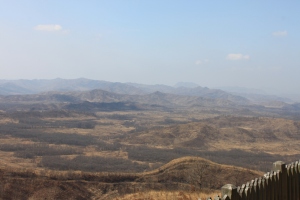 View of North Korea from the outpost where the seminar was held.

Anti-war does not mean anti-military for Mr. Park. He has extremely close ties with the soldiers who serve along the DMZ and often puts on shows for them and invites them to see his art, to participate in performance art. When I saw some of the photographs, I wondered whether the military would actually let him engage in such work, but it appears that because he constantly expresses the deepest respect for every individual he works with, the peace theme is not a problem.

He brings artists from around the world to represent the DMZ and the cry for peace in their art once a year. He also puts on live performances combining music, art and theater for the benefit of soldiers stationed at the DMZ. He also hosts seminars and other gatherings to discuss his art and the geopolitical reality we face.

I do not know exactly how you would measure Mr. Park’s impact, but I would venture that it is not insignificant. 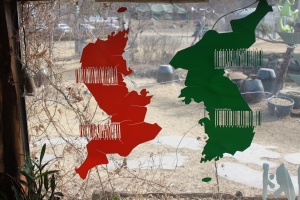 Image of the Korean Peninsula with bar codes on the window of the tea house. 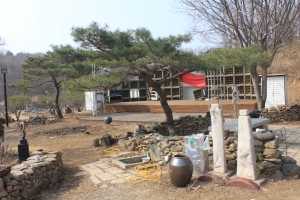 Sculpture in front of the bungalows.