The Chinese inscription above the entrance to Sterling Memorial Library

The stone inscriptions at Yale spoke to me as an undergraduate, particularly the haunting carvings of the Sterling Memorial Library. This enormous bibliographic cathedral is a mixture of late Art Deco and Gothic Revival that was designed by James Gamble Rogers and completed early in the depression in 1931. 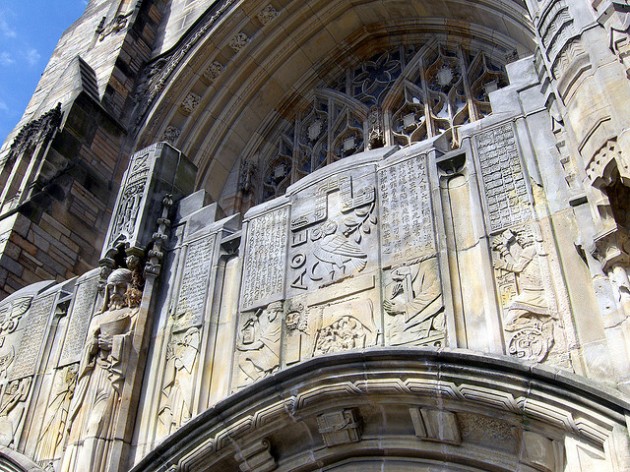 Above all, the carvings over the main entrance to Sterling Memorial Library made the deepest impression on me as I passed through them almost every day. From left to right above the right door stand four tablets with ancient scripts: Arabic, Greek, Chinese and Mayan passages with their respective scribes standing below. The decision to include Chinese language among the inscriptions of the great traditions over the main door of Sterling Memorial back in 1931, and to have it flanking the Greek inscription, as opposed to being placed off in a corner with other non-Western languages, inspired me to look at the China through different eyes. Yale had given it a centrality that inspired, as if it was a true parallel for the Western tradition.

Yale, after all, had chosen to put Hebrew, not Greek or Latin, on its crest. 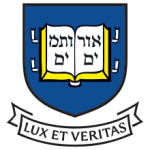 Although Hebrew might have been the language of God, the entire Western interpretive tradition had insisted on viewing the Hebrew tradition through Greek or Roman filters. The decision to put Hebrew on the Yale crest seemed to me, more than just rivalry with Harvard, a profound statement about the equality of the great cultural traditions.

Here is a close up of the Chinese inscription:

He lays down the law with full confidence

Sometimes he has taken a chief conspirator captive

Or decapitated the arch villain

When he found himself far away from relief troops

Or in the courtyard of a criminal

He did not show the slightest discomfort

He would read off their crimes

And risk his limbs to the sharp blades

Sincerity and loyalty is written on his visage

There had never been such a figure in history”

The emperor gave him this effusive praise.