The Gate to the East Rises over Suzhou

Leave a comment Posted by Emanuel Pastreich on September 3, 2012

I have not been in Suzhou since 1991. I remember the old canals that I had read about so often were being rebuilt and prettied up in ways that I must say were not exactly to my liking. Suzhou was changing quite rapidly at the time and I felt I could see something slipping away before my eyes. 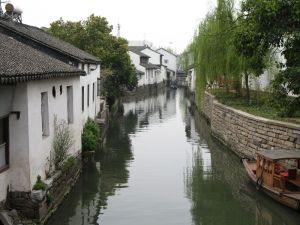 The canals of Suzhou embody the understated wealth and erudition of this intellectual mecca. If I had to imagine an ideal hope, perhaps Suzhou of the Ming Dynasty would be it.

But now an enormous “Gate to the East” 东方之门 is rising above Suzhou that dwarfs everything else. Two towers come together as one, perhaps symbolizing a marriage of East and West, or of past and present.

The changes are profound, and reminds us that increasing Chinese economic and political self-confidence has not manifested itself in a reaffirmation of traditional Chinese aesthetics, with a few notable exceptions.

The two columns of the Gate to the East are slowly growing towards each other over the Suzhou skyline.