Seoul Metropolitan Government has launched MNTV.NET, an experimental broadcast system for information about life in Seoul. Although the content is rather limited, the idea is quite novel because of the wide range of languages offered. It appears that the plan is to address not so much foreign tourists, as non-Koreans living in Seoul. That is to 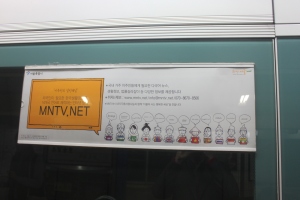 say, to treat foreigners as citizens of the city. Here are the languages featured in the broadcasts: