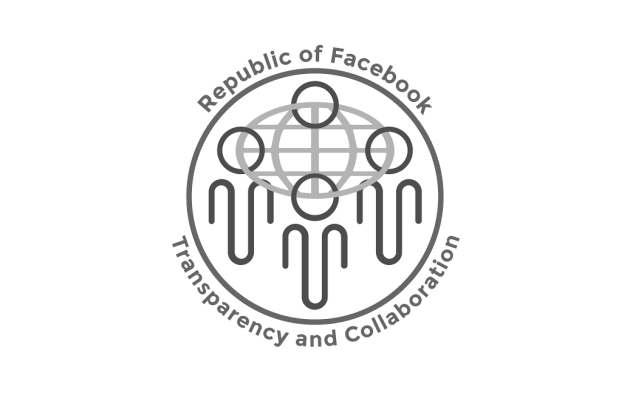 Do join us in establishing the Republic of Facebook.

You have nothing to lose but the limits on your own personal potential.

Join us in an effort to address directly the awesome challenges of rapid technological evolution and climate change in a systematic manner that will give hope to our children through the establishment of a new form of accountable participatory global governance.

The Declaration of the Democratic Global Republic of Facebook

When in the Course of human events, it becomes necessary for the people linked together by common interests and new technological potentials to assume among the powers of the earth, the separate and equal station to which the Laws of Nature and of Nature’s God entitle them, a decent respect to the opinions of humankind requires that they should announce the causes which impel them to declare their self-determination.

We hold these truths to be self-evident, that all women and men of the Earth are created equal, that they are endowed by their Creator with certain unalienable rights, that among these are Liberty, Freedom of expression and protection from the predations of the powerful.

That to secure these rights, governments are instituted among humans, deriving their just powers from the consent of the governed.  If the ways of society are administered in an arbitrary and self-serving manner for the profit of the few, it is the Right of the People to establish a new form of government, laying its foundation on such principles and organizing its powers so as to assure their Safety and Happiness.

In an age of climate change and unprecedented globalization, it is our solemn responsibility to come together as citizens of the world and work together to create a more honest and transparent system for governing the complexities of this world that will allow us to rally ourselves to the challenges.

5 responses to “Declaration of Independence for the Republic of Facebook”