“A Republic of Korea Greater than Koreans imagined” Is it possible? October 27, 2017

“A Republic of Korea Greater than Koreans imagined”

(First Floor of KT Building, Gwanghwamun [next to US Embassy])

The Republic of Korea is faced with overwhelming challenges from the current economic collapse, the breakdown of an equitable society under pressure from an aging population and the unequal distribution of wealth and the constant pressure of climate change.

The problems are almost overwhelming, although few want to discuss them. Yet, might there not be some opportunities beneath the surface in Korean know-how, in the Korean culture and in the remarkable vitality of Korean youth? Join us for a open discussion with Emanuel Pastreich, director of the Asia Institute and author of the recent best-selling book, “A Republic of Korea Greater than Koreans imagined.”

Seminar “Endgame: A Hard Debate on the North Korean Nuclear Threat” at The Korean Foundation for Advanced Studies

Leave a comment Posted by Emanuel Pastreich on September 25, 2017

I received this invitation to a seminar on the nuclear threat from North Korea entitled “Endgame: A Hard Debate on the North Korean Nuclear Threat” from the Korean Foundation for Advanced Studies. I was deeply disappointed that I cannot attend because of a conflict with my classes. I wanted to attend the seminar so that I could stand up in the middle of the discussion and state loudly and clearly that this rigged up “hard debate” between American and Chinese scholar does not in any way represent the views of either the American people, or American experts on East Asia.

Rather the “hard debate” is a fabricated one in which representatives of think tanks that have been bought off by military contractors and the super rich parade their false and misleading data about the “threat” of North Korea, making it look like the United States and North Korea, or China, are so far apart that their is no dialog possible. This is not policy, but rather a criminal form of corruption and collusion with for profit organizations.

The Chinese speakers invited, Jia Qingguo (Peking University) and Zhang Duosheng (China International Institute for strategic Society ), are rather diplomatic personalities and are unlikely to mention that the United States is in violation of international law and in violation of the Nonproliferation Treaty itself. They will not bring up just how dangerous and irresponsible US policy is under the so-called Trump administration. F

ormer Korean Foreign minister Professor Yoon Young-kwan is even more diplomatic and even less likely to mention the criminal actions of the Trump administration.

Bruce Klingner of the Heritage Foundation is a nice guy, but has been presenting arguments about North Korea that make no sense over the last few years, skewed to make it look like the problems originated in Pyongyang. He is a smart guy and he obviously knows that what he is saying is untrue.

Gary Samore, Executive Director for Research at the Belfer Center at Harvard University is equally compromised and even more ignorant of Korea.

Sadly, I cannot attend the event, but I hope that other Americans will go and shout out, if necessary, that this debate between China and the United States does not represent the American people. Tell them all that these  two “experts” who don’t speak a word of Korean and have been consistently promoting an unnecessary confrontation with North Korea are not qualified to represent our country.

“Endgame: A Hard Debate on the North Korean Nuclear Threat” 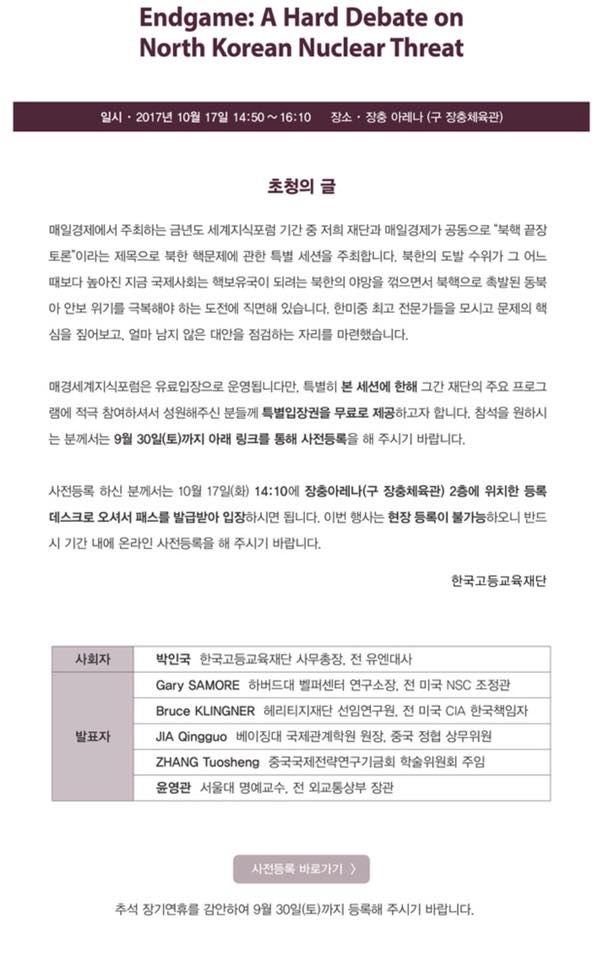 Leave a comment Posted by Emanuel Pastreich on September 24, 2017

Leave a comment Posted by Emanuel Pastreich on September 19, 2017

SUBMIT BETWEEN SEPTEMBER 18 AND OCTOBER 1

Leave a comment Posted by Emanuel Pastreich on September 18, 2017

“A Republic of Korea Greater than Koreans imagined”

Chapter one discusses the sad “candlelight revolution” that promised so much but has not delivered the transformation that it promised. What went wrong and what will it take to create a truly healthy and effective political culture in Korea?

Chapter two considers the geopolitical position of Korea today, suggesting that the only way for Korea to survive is to start making proposals for what the world can be and acing on those proposals. Following the suggestions of famous international figures of questionable ethics offers no future for Korea.

Chapter three considers how we can start to establish new values and priorities in Korea starting with our daily lives and experiences. How can we change our habits to reduce waste, use technology in a positive manner and make sure that those of us who have special skills contribute to the greater good.

Chapter four provides a harsh critique of the inability of Koreans to establish a Korean perspective, or a Korean approach to scholarship or art, despite Korea’s tremendous educational advantage. Specific assets of Korea, like the tradition of filial piety, traditional architecture, and traditional cuisine are brought up as examples of how Koreans can start to create a Korean cultural space in our daily life.

The final chapter five suggests that Korea does not need some massive policy declaration where overfed politicians clap as they cut a ribbon, but rather that the efforts of all Koreans to think about how a life based on consuming disposable goods, playing online games, and blindly pursuing technology for the sole reason of securing markets is dangerous. The conclusion is that ultimately citizens require a real bravery to act, and to break out of the mold. Without such commitment and such bravery, efforts at innovation will be but slogans posted at corporate headquarters.

A political culture in Korea that enables a national policy debate

Why do voters end up expecting a messiah?

Unification is not a matter of choice

We need a politics grounded in habits

Is a “strong government” what the citizens need?

Why science should be paired with education, and technology with industry

How to establish a truly Korean journalism

What is the “soul” of Seoul?

Chapter 2 “A geopolitics that is for Korea and by Korea”

An honest dialog on security between China, the United States, Korea and Japan

How Korea’s sarangbang could become a global social network platform

Setting up a safe Republic of cyberspace

Consumption on impulse which never asks “why?”

Let us live in accord with nature

Strict rules do not mean a loss of freedom

Can the professor serve a role in society as an intellectual?

An obsession with appearances is dangerous

This is the age of women

Why can’t Koreans develop their own way of thinking?

How the Republic of Korea is controlled by mathematics

Finding Korea’s potential in the culture of our ancestors

Getting back to the local cuisines of rural Korea

Let us create a Seoul based on Seoul, not Manhattan

Finding the code to transform Korea in its past

Chapter 5 “Nothing massive is required to save our economy”

How can we assure Korea’s future?

What will Korea export in the future?

Korean manufacturing has collapsed into mannerism

Does Korea need innovation, or perhaps rather bravery?

I published “A Republic of Korea which only Koreans do not know” in 2013, four years ago, because I felt that Koreans underestimate the potential in within Korea itself, and its culture. I felt that Koreans unnecessarily dismiss Korea’s own strengths and hold high the rather questionable merits of other nations.

But this time, I felt that Korea faces such a tremendous crisis in its society and its economy, but also in its diplomacy and security, that I much more strongly worded argument was needed. Too many educated Koreans have fallen into patterns of denial and thoughtless ritual and they are not focused on what Korea actually needs to respond to a dramatically shifting climate, a rapidly aging society and an economy being turned upside down by advances in technology.

I did not write this book to be a best seller and I selected a small publisher that would let me write what I think without editing it for the purpose of marketing. The book is meant as a challenge to educated Koreans to tell me what part of this vision is wrong, and why Korea is not addressing these problems. But it is also meant to be an inspiration for young Koreans. I want Korean youth to feel confident that they are as competent as anyone to suggest which direction should go and the future is ultimately their future.

For sale online at KYOBO BOOKS.

Leave a comment Posted by Emanuel Pastreich on September 9, 2017

Leave a comment Posted by Emanuel Pastreich on September 6, 2017

Leave a comment Posted by Emanuel Pastreich on September 3, 2017

Leave a comment Posted by Emanuel Pastreich on September 3, 2017

“The coming chaos on Korean Peninsula”

Korean newspapers were filled with reports of the unprecedented drought that did such damage to local agriculture over the last month leaving reservoirs bone dry. The Korea Meteorological Administration noted in May that total precipitation was just 161.1mm, the second-lowest since statistics started being kept in 1973.

But the Korean media has hardly a word to say about the relationship of this drought to climate change, nor the ties between what is happening here and the spreading deserts in Northeast Asia. The region faces desertification, and the prospects for the future are not good. END_OF_DOCUMENT_TOKEN_TO_BE_REPLACED