Leave a comment Posted by Emanuel Pastreich on February 10, 2018

We are so accustomed to a functional political system in the United States that sets standards for the world that in this transitional period it is quite difficult for many to conceive that massive institutional decay is taking place in Washington, D.C. , that will only accelerate and, if not handled well, risks both global war and domestic conflict far beyond what we have seen so far.

That means we had better get serious about an accurate interpretation of current events in the U.S.or risk having events overwhelm us.

First, we must move beyond the simplistic opposition between conservatives and liberals in American politics. We have to stop trying to shoehorn the contradictory information that we observe into this meaningless dichotomy. The Trump administration is a radical, not a conservative, political movement and its opposition, in that it exists in Washington, is not liberal.

We are witnessing a “three-way fight” in the U.S. that defies assumptions about politics over the past 70 years. A complex battle has reached a peak and it is what has allowed Trump to become president, and to remain in power thus far. END_OF_DOCUMENT_TOKEN_TO_BE_REPLACED

Leave a comment Posted by Emanuel Pastreich on February 6, 2018

Leave a comment Posted by Emanuel Pastreich on February 5, 2018

Korea’s mainstream media have been plastered with articles and editorials that repeat the storyline that Victor Cha expressed concerns about the so-called “bloody nose” strike on North Korea in his talks with the Trump White House and was dropped as a candidate for ambassador to Korea as a result.

But such a narrative does not hold up to even the most elementary scrutiny. Nor does the claim that Victor Cha is an urbane and highly respected expert on North Korea hold much water.

To start with, Cha has been silent over the past year as Trump advocated for an unprovoked (possibly nuclear) attack against North Korea and took numerous steps in his approach to diplomacy that have destroyed the State Department and led most senior diplomats to resign, or be dismissed.

Cha has also been silent regarding the blatantly racist comments made by Trump or other illegal uses of the Department of Justice’s authority.

But before we get into the details of what might actually be going on, let us consider the significance of this failure to appoint an ambassador to South Korea for more than a year after the launch of the administration.

Some pundits note that other ambassadorships remain open, but, in fact, the major positions in East Asia, and the world, have been filled.

Moreover, granted that Trump is talking about North Korea practically every week, saying that it is the most important security issue, the slight is obvious.

The failure to appoint an ambassador, or even to start the nomination procedures at the Senate Foreign Relations Committee, should be interpreted as a major insult.

Mysteriously, the Moon administration has been silent about this Lese-majeste. The conservatives, who ought to be standing up for Korea’s sovereignty, are rather attacking the progressives for failure to be blindly loyal to the Trump administration.

In fact, it is the longest time that Korea has been without an American ambassador since Edwin Morgan was sent back to Washington D.C.

Wait a minute ― who is Edwin Morgan?

Well, the last time that we witnessed such a delay in replacing the US ambassador was when Theodore Roosevelt turned a blind eye on the Japanese absorption of the Korean Empire of Emperor Gojong and ordered Secretary of State Elihu Root to telegraph Ambassador Edwin Morgan instructions to “withdraw from Korea and return to the United States” on November 24, l905. The next US ambassador to arrive was John Muccio ― 45 years later.

Korea has not become a colony this time, but its relationship with the U.S. has clearly been downgraded by this action. Moon is being smothered in kind words from Trump about an end to “Korea passing” while Korea was all so politely kicked down the stairs and forced to act like a loyal ally even as tariffs were imposed unilaterally and demands were even made that it follow a security policy in which Korea had no voice in formulating.
END_OF_DOCUMENT_TOKEN_TO_BE_REPLACED

The oil spill in the East China Sea is evolving into one of the greatest ecological disasters ever to hit East Asia, and it will destroy much of the fragile ocean ecosystem that we so depend on over the next year. This is happening at a time when we are distracted by North Korea and the decay of government, media and other institutions that we previously counted on to respond to this sort of a crisis. We must quickly reinvent citizenship, Earth Citizenship, and reinvent government, real government, to respond to this crisis. It is also an opportunity for the United States to do something that is actually helpful in the region.

We must immediately draft a long-term plan for a global response to this catastrophe which will engage people at all levels of society in Korea, China, Japan the United States and Southeast Asia so that we can create a team to investigate the crisis according to the scientific method and put forth a long-term strategy for first rebuilding the ecosystem, warning citizens of the region of the dangers and helping those whose careers are destroyed. Working with scientists and other experts we will come up with a long-term system to respond and finally lay down clearly that we will move beyond oil and conquer our addiction to fossil fuels in a short period of 2-5 years. We must also change our culture and our habits so that we move beyond consumption and growth and embrace meaningful lives based on the search for truth and to promote cooperation between citizens of the community at the local, national and global levels.

Finally, we must admit that the expensive hardware that the militaries of the region have procured are useless in addressing this crisis. We must decisively redefine “security” for our time, move beyond the limited and confrontational concept of “alliance” and embrace the United Nations charter once again as we move to transform our militaries into transparent and effective parts of society which respond to the ecological crisis, above all, to climate change.

The Earth Management Institute and the Asia Institute invites all concerned citizens of the world to join us in this effort.

(Director of the Asia Institute) 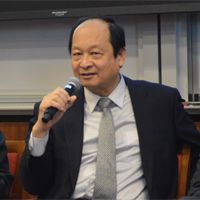 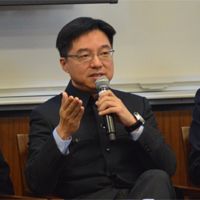 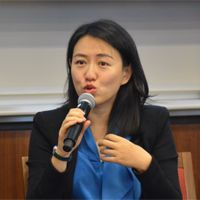 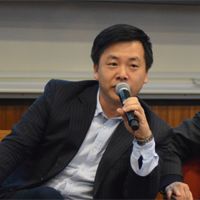 Leave a comment Posted by Emanuel Pastreich on February 1, 2018

I had a chance to participate in this extended discussion on the future of think tanks as the director of the Asia Institute which was held in Beijing. The event, which was conducted in Chinese, was hosted by the Center for China and Globalization whose President Wang Huiyao was invited me to join the discussion. See the article below in China Plus.

Seven Chinese think tanks have been included among the world’s top think tanks in the 2017 Global Go To Think Tank Index Report, published by the Lauder Institute at the University of Pennsylvania.

Wang Huiyao is president of the Center for China and Globalization, one of the Chinese think tanks to make the list.

An advisor to the State Council, Wang Huiyao suggests more think tanks – as well as upgrades to the existing ones – are needed to help the government and the public make informed decisions amid unprecedented economic challenges.

“Think tanks will not survive if they don’t innovate. Think tanks are ‘idea factories’ that can influence’ public policies, which I think is very important. We are not consulting firms. Think tanks are non-profit and are supposed to provide better ideas for the public and the making of public policy.”

Ding Yifan is a senior researcher with National Strategy Institute with Tsinghua University.

“Think tanks need to find ways to provide rational and comprehensive ideas to decision-makers. Decisions on public policy cover a wide range of aspect. Rational ideas can be hard to accept when there is an explosion of populism. Many global think tanks are faced with just such challenges.”

In China, most think-tanks are backed by the government or run through the country’s university system.

And while the rise in social media has seen these institutions faced with a new level immediate public scrutiny for their concepts, Liu Qian head of Greater China for “The Economist,” says its up to these institutions to rise above the noise to provide sound advice to policy makers.

” I think the most important thing for researchers is insight. The development of new media does have an impact on us. But we’ve found that while the public usually notes the latest news on twitter, facebook and other social media outlets, they invariably turn to us to see like what ‘The Economist’ says. In an era of information explosions, we spend a lot of time and energy on doing researches and investigation for a report. Although the public may sometimes be affected by various sentiments, they almost always realize the importance of insight and rational thought.”

Selected from a list of over 170 top think tanks around the world, seven Chinese think tanks on the list include China Institutes of Contemporary International Relations, which is the best performer, ranking the highest among the Chinese groups on the list at 29.

The report shows the United States has the largest number of think tanks, at over 18-hundred, while China sits second with over 500, followed by the UK and India.