Leave a comment Posted by Emanuel Pastreich on June 10, 2018

I saw this elderly woman new the government complex in Gwanghwamun handing out advertisements to people walking by. She tried her best, but she was ignored, and even pushed out of the way, by those whom she approached.

For those who were irritated by her efforts, she was just an inconvenience. Certainly, she was offering ads for products that had no appeal for them.

But the more essential issue was how this elderly woman was forced, by a crumbling economy to engage in such an unpleasant and painful job in order to feed herself. We see this happening in Korea more and more frequently.  I doubt that the men and women who sweep by her had ever thought about this fact.

I think they are also for the most part in denial about an equally important point: that they themselves could easily end up like her, or worse, as the global economy continues to implode.

I was not sure what to do myself.

There seems to be so little interest in South Korea in a serious discussion of inequity. But the problem is so severe that I want to suggest that along with climate change, it should be at the top of everyone’s list.  If you look at the leaflets handed out by candidates in the run-up to the regional election next week, these two issues are not even addressed in a meaningful manner. 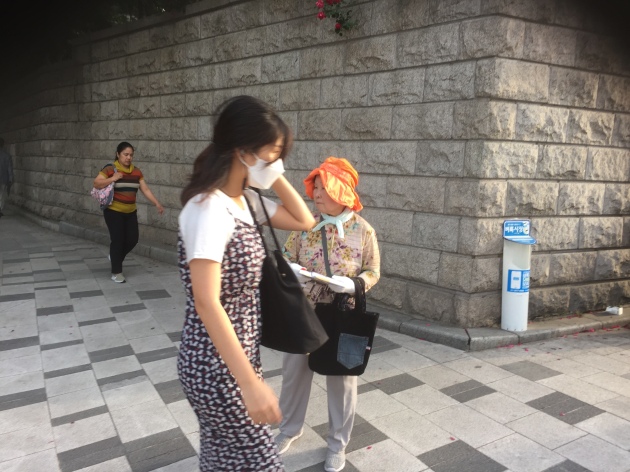