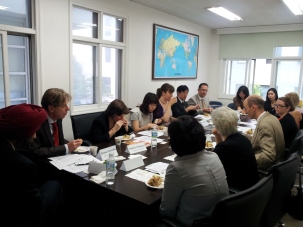 The Asia Institute hosted a seminar bringing together experts from around the world to discuss the critical topic of the role of women in science and technology at the India Education Center in cooperation with the Center for Women in Science, Engineering and Technology on September 26. The participants were science attaches from the embassies of Canada, Japan, Germany, Turkey, the United Kingdom, India and Finland.
Although women are increasingly playing a critical role in nations around the world, and make up some of the most capable workers, they have been shying away from the sciences to the detriment of the society. The seminar consisted of an in-depth, and honest, discussion of effective means for promoting the study of science and the pursuit of life-long careers in science for women.

The discussion was lead by Dr. Heisook Lee, director of Center for Women in Science, Engineering and Technology, Emanuel Pastreich, director of the Asia Institute and Lakvinder Singh, president of the India Education Center and program director at the Asia Institute.
Discussion revolved around the unique problems in various countries related to the problem of women entering the field of science, and more generally holding long-term careers. Each participant discussed programs now in place in their own country and prospects for improvement. Frances Wood (Economic Counselor, Embassy of the United Kingdom.) and Kirsten Bauman (Science and Technology Officer, Embassy of the United States) spoke at length about the challenges girls encounter studying in the sciences and pursuing their career in STEM as well as about the difficulties women experience in continuing the career in STEM due to “unconscious bias” and “glass ceilings.”

Articles, Asia Institute, Technology and Society, Women
← “The Crisis in Education in Korea and the World” Asia Institute Seminar with Peter Hershock “From Pacific Pivot to Green Revolution” in Foreign Policy in Focus →